I’ve never been much of a NYE person. I don’t mind celebrating with close friends and a few drinks but I would much rather prefer a quite evening over a wild NYE party. This year, I had nothing planned. In fact, I was debating on if it was even worth staying up to midnight or not. However, when one of my friends (and fellow interns) invited me and a few other interns to visit his hometown, Tongyeong, for NYE, I couldn’t say no. 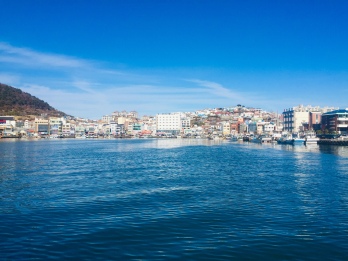 Tongyeong is a relatively small town on the southern coast of South Korea. It’s well known among Koreans as a popular seaside escape – famous for its super fresh seafood and stunning scenery. It’s a bit warmer due to its location in the south and a breath of fresh air compared to Incheon and Seoul (literally, the air is actually safe to breath). It’s a place I had never heard of before Josh mentioned it, but I was so excited to get an authentic Korean experience and explore a place most foreigners don’t visit.

My friends, Ines and Vaithe, and I met up at the Incheon bus terminal on Sunday morning to catch a bus to Tongyeong. Although Tongyeong is on the complete opposite side of the country, the bus ride was only about 4.5 hours (as an American this is crazy to me considering it takes 4.5 hours to drive across my STATE). The bus was super nice with large, reclining seats and a giant TV that showed lots of cat videos. The best part, however, was the incredible scenery along the way as we drove through the mountains.

We arrived in Tongyeong around 1 pm and our friend Josh picked us up at the bus terminal. Josh is originally from Tongyeong so he knows all the best restaurants, views, and secret shortcuts in town. And because he had a car, we were able to go wherever we wanted! 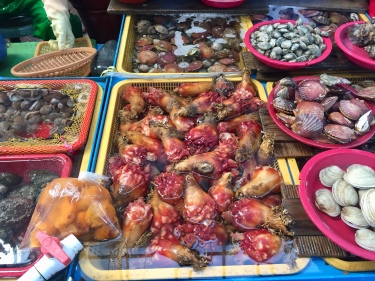 We started off heading to lunch at Tongyeong’s largest fish market. Josh led us into a small restaurant that I would have never even noticed if I was exploring on my own and we enjoyed a typical Korean lunch full of seafood. I opted for a basic fish soup (I’m not the biggest fan of seafood other than simple fish) while Vaithe and Ines went more exotic, ordering sea pineapple and oyster bibimbap. I tried a bit of the sea pineapple and instantly regretted that decision.

After lunch we checked into a hostel in central Tongyeong and then headed to Dongpirang Village, which is famous for vibrant artwork that line the hilly streets. I was really impressed with the artwork, but even more impressed by the views of the city below as we climbed the hill where we found a small temple on top. 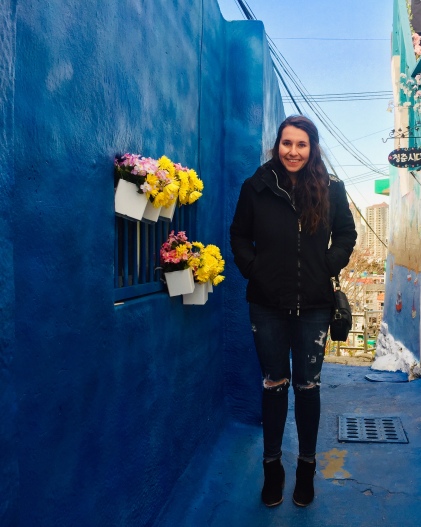 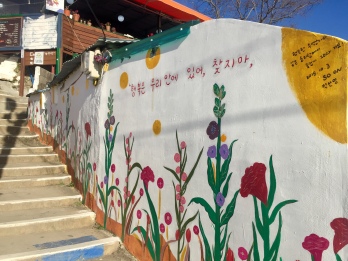 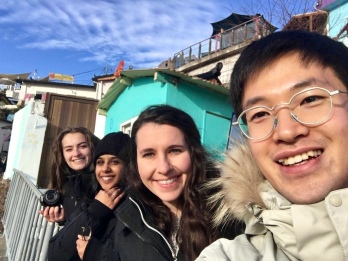 After exploring Dongpirang Village and grabbing some coffee to warm up, Josh took us to a hotel he used to work at to watch the sunset from the 19th floor. Perks of having a local tour guide! After sunset, we had another seafood meal before heading back to the hostel for a quiet and chill night. 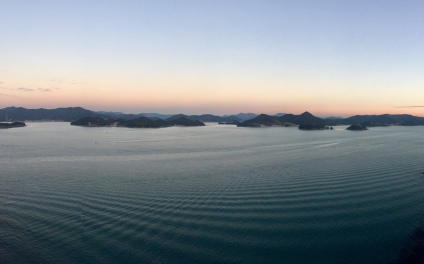 Sunset from the 19th Floor

The next day Josh picked us up at 9 am and we headed to one of the islands to go hiking! I love hiking so this was the part of the trip I was most excited about. The hike to the top of Mireuksan was really enjoyable, not too difficult or long, not too many people and beautiful views along the way. We made it to the top in about an hour or so where there was a large observation deck (most people take the cable car there). We took in the views of the surrounding sea and islands dotting the landscape as we sipped on some delicious, hot mogwa tea that Josh’s mom made for us. 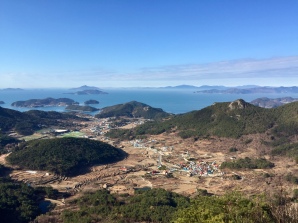 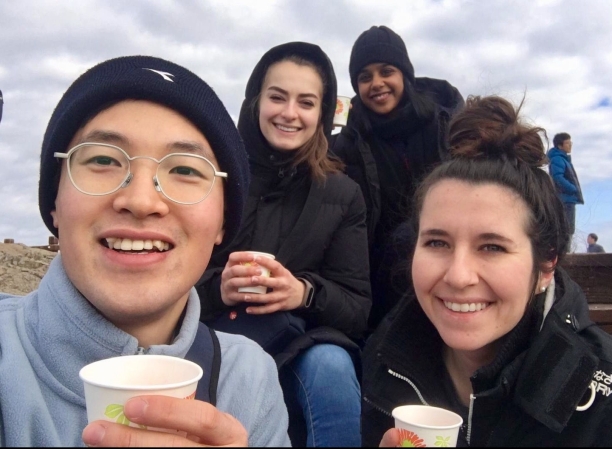 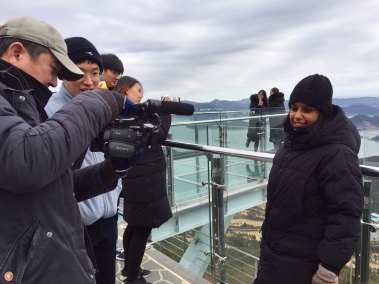 Vaithe being interviewed for the news

Before starting our hike back down the mountain, we were approached by a guy from the main English news station in Korea who wanted to interview Vaithe, Ines and I about how we were enjoying Tongyeong (probably because foreigners are a rare sight in this town). Vaithe and I agreed so I guess we are on some national Korean news channel now.

Later that afternoon, Josh took us for a drive around the island, speeding down curvy roads clinging to cliffs over the ocean and passing small fishing villages along the way. Right before the sun set, we parked on the side of the road to watch the last sunset of 2018. In Korea, watching the last sunset of the year is a tradition and we were joined by tons of other people pulling over to watch the sun set over the ocean. 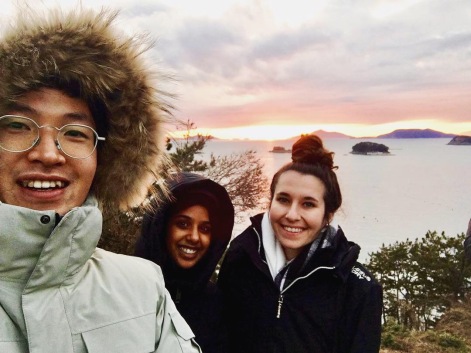 That night we went out to a bar for a few drinks as we waited for midnight. It was hilariously anticlimactic as we watched the seconds tick down to 2019. Although many people do stay up until midnight to bring in the new year, it’s not really a big deal in Korea. There are some big celebrations in Seoul that we watched on TV at the bar, but otherwise I think we were the only people counting down.

However, Korea celebrates the new year in its own way. After a few hours of sleep, we woke up early to head to a sunrise event. In addition to watching the last sunset of the year, Koreans also watch the first sunrise of the new year. For them, it’s a way to start off the new year in a positive way and I absolutely love it (I might adopt this tradition). We headed to a park where there was a big stage with performances and TONS of people! It’s basically the kind of celebrations I’m used to at midnight, just at 7 am instead. As the sun approached the horizon the excitement built and as soon as it broke over the mountains in the distance, everyone cheered and balloons were released. What a way to start a new year!

Overall, Tongyeong was an amazing little town. I really enjoyed a few days outside of Incheon and loved the scenery, hiking and fresh air Tongyeong had to offer. The best part was celebrating the new year Korean style with friends and experiencing a very different side of Korea that most foreigners don’t see. It’s hard to believe I only have a few more days left in this beautiful country, but this trip was a great way to wrap up my time here and get 2019 off to a great start!

One thought on “New Year’s Eve in Tongyeong”

It took a pandemic for me to finally buy a chair so I can sit at my desk. But now I have a cozy place to work for the next few weeks/months (??) ... #stayhome #workfromhome #office #homeoffice #officedecor #workspace #officespace #apartmenttherapy #homedecor
Sunday mornings ☕️
Thankful for all the people, from Miami to Philadelphia to Tallahassee, who have helped me get back on my feet the past few months. Peace Corps didn’t work out, but when one door closes another one opens and I’m super excited to be starting a new job in Washington D.C! Check out my new blog post (link in bio) for the full update!
Doesn’t get more American than baseball, hot dogs and a $15 beer 🇺🇸⚾️
What a crazy few days. I found out Peace Corps was sending me home (temporarily) Friday morning, traveled 32 hours halfway across the world and arrived in Tennessee just 2.5 hours before @briannam28‘s wedding. I had been mentally preparing myself to miss this day for almost a year and I’m honestly still shocked by how the past few days have unfolded. But, despite the jet lag and exhaustion, I’m so thankful things worked out I got to be here celebrate with them!
Enjoying the sights, sounds and food of Kathmandu. New blog post about some of my favorite adventures in the city so far 🇳🇵(link in bio) #nepal #kathmandu #city #temple #travel #food
%d bloggers like this: