Ever since moving to Korea in August, I have been thinking about taking a trip to Tokyo. It’s less than a two hour flight from Seoul and, with many budget airlines to choose from, it’s a relatively cheap trip (compared to traveling from the US). But of course, life has been busy and for the past four months there was always a reason I couldn’t go.

However, I got tired of saying no so I booked a plane ticket on a whim. Within a few days I was en route to Tokyo for a 72 hour weekend trip!

I started my first full day in Tokyo by heading to Golden Gai. Golden Gai is a collection of narrow alleys lined with teeny tiny bars. It’s crazy popular at night with bright signs and many tourists flocking to these famous bars. However, I opted to visit during the day to avoid the crowds (and expensive drinks). During the day, most of the bars are closed and the area is pretty desolate, but I enjoyed the peacefulness and was able to take some great photos as I explored these narrow alleys.

After checking out Golden Gai and stumbling upon a random temple and park, I headed to Meiji Shrine where I met up with one of my friends (and fellow GCF intern) Tim, who just happened to be in Tokyo the same weekend. Meiji Shrine was in a beautiful park that almost made you forget you were in one of the largest cities in the world and, although it was like most other shrines and temples I’ve seen, there was a traditional wedding taking place when we visited which was exciting to see! 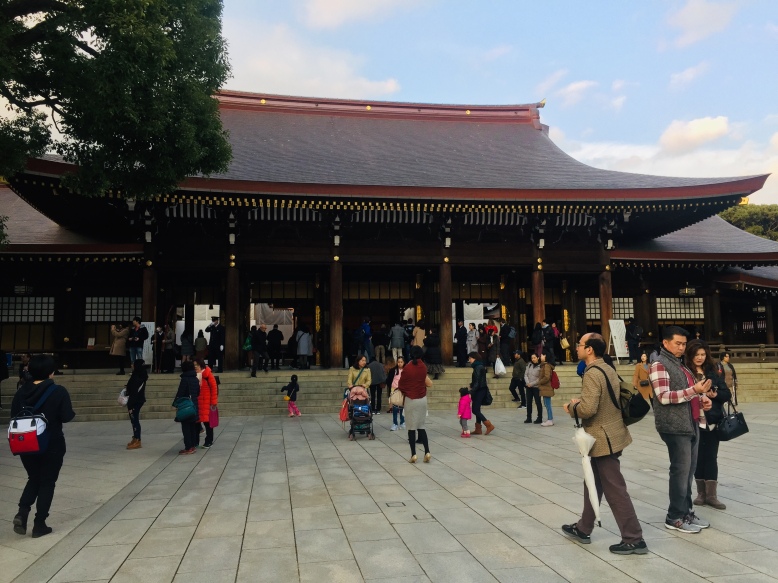 After Meiji Shrine, Tim and I walked down Takeshita shopping street, which is just outrageous. It’s a narrow street lined with endless shops and way too many tourists. I wasn’t a huge fan, but it was an experience I guess. Before going our separate ways, we stopped for some street food – little balls filled with a sweet cream cheese filling and taiyaki, which are fish shaped pastries with various fillings.

Next, I headed to Roppongi to meet up with my friend Yuki for dinner and drinks. Yuki is from Tokyo and we met almost six years ago while studying abroad in Panama. It was so much fun catching up on life and reminiscing on our crazy times in Panama! We started the night with a few small Japanese appetizers (they reminded me of tapas) and some cheap Japanese beer before heading to a bar for some salsa dancing. Salsa dancing is the last thing I expected to do in Tokyo of all places, but after studying abroad in Panama, Yuki and I couldn’t resist! After a bit of Salsa, we headed to a British style pub before grabbing some late night food that Yuki advised me only tastes good after a few drinks. 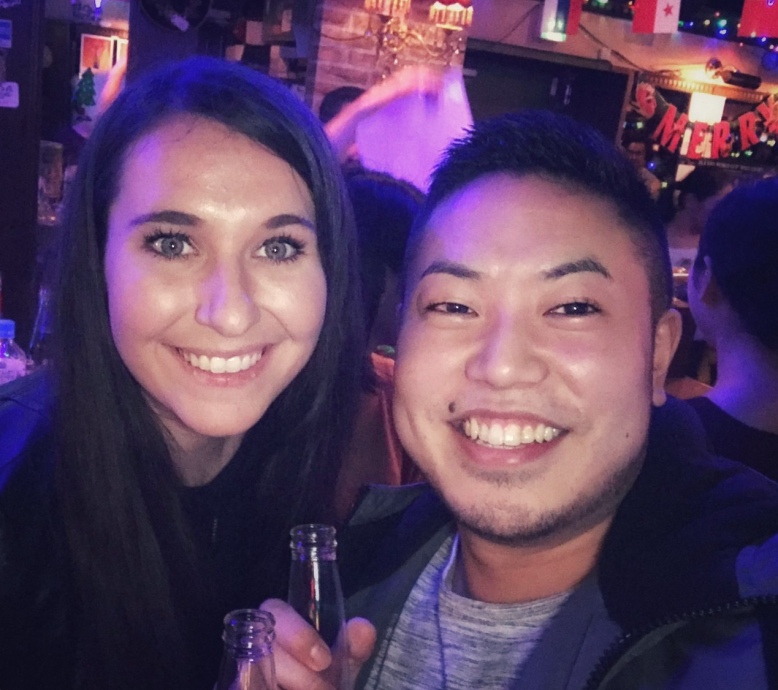 After a long night out, my second day in Tokyo got off to a slow start to say the least. But when I finally managed to get my butt out of the hostel, I made my way to Nezu Shrine. I’ve seen a lot of temples and shrines during my time in Asia and to be honest, a lot of them look the same. But I decided to go to Nezu Shrine because it’s a bit off the beaten path. It was in a quiet, residential neighborhood and I loved how peaceful it was compared to some of the bigger, more touristy shrines.

After exploreing Nezu Shrine a bit, I walked around Ueno Park before heading to Ameyoko Market. I loved Ameyoko Market because it wasn’t super touristy like some of the other markets in Tokyo. Right below the train tracks, streets were lined with shops selling everything from shoes to fish and people filled the streets sitting on plastic stools while eating fresh street food.

To end the day, I met up with Yuki again in the Ebisu neighborhood for dinner. I told him I wanted something really Japanese, but not sushi, and he didn’t disappoint! We ended up going to a cozy, little Japanese restaurant where they cooked right in front of us. We started with some appetizers – blocks of cream cheese topped with miso (turns out miso isn’t just a soup) and some beef in a delicious garlic sauce. The main meal was a block of mixed veggies topped with pork and cheese and covered in some amazing sauce and mayonnaise. Honestly, one of the best meals I’ve had! We ended the night at a cute little bar where I tried some traditional Japanese sake, which is a lot like Korean soju. It wasn’t horrible, but like soju, I wasn’t a huge fan.

On my last day in Tokyo, I hit the ground running. There was still quite a bit I wanted to see and I had to leave for the airport around 3 pm to catch a flight back to Seoul. I got up bright and early and headed to Senso-ji Temple, the most famous (and touristy) temple in Tokyo. I arrived at the temple around 7:45 am and, even though most of the shops along the famous Nakamise Shopping Street were not open yet, I was so glad I got there early because there was almost no one there! I was able to enjoy the temple without the chaotic tourist crowds.

After Senso-ji Temple, I headed to Tsukiji market. Tsukiji is probably the most famous market in Tokyo and is most well-known for its early morning tuna auctions. However, just a few months ago the tuna auctions were relocated to a different market, Toyosu Market. I decided to check out Tsukiji anyways and found lots of fresh fish, little restaurants and a few souvenir shops. It was quite touristy though with people yelling at me in English to buy their sushi, which was annoying.

Shibuya Crossing was next on my list of things to see. You’ve probably seen Shibuya Crossing in photos with thousands of people rushing across the street surrounded by flashing neon signs. I went during the day, so the neon signs weren’t as impressive and I was quite surprised by how few people were there, considering its supposed to be the busiest street crossing in the world. I did go at a really random time in the morning, so maybe that’s why it was so quite.

I did a bit of shopping, picking up some matcha tea (obviously) and a few chocolates, before heading to the Tokyo Metropolitan Government Building. A pretty random place to visit, but I read that they have an incredible observation deck at the top that is free to the public. Of course, there are tons of observation decks in Tokyo, from Tokyo Tower to Tokyo Skytree to some lesser known observation decks, such as Roppongi Hills. However, all these observation decks come with a price tag, which is why I opted for the free Tokyo Metropolitan Government Building. Unfortunately, it turns out that the North Observation Deck was closed for renovations and the South Observation Deck just happened to be closed the day I went (if you go, be sure to check this in advance!). I was so disappointed, but with some quick googling I found another building I could go up for free, and although the view wasn’t as nice, it gave me a glimpse of the sprawling city of Tokyo from above.

Overall, my weekend in Tokyo was amazing – full of new adventures and old friends. I loved the international feel of the city and how safe, clean and modern it was. Plus the benefits offered to tourists were a huge bonus (tourists can get an unlimited 72 hour metro pass for about $13!). It’s a massive city and 72 hours definitely wasn’t enough to see, do and eat everything Tokyo has to offer. But I’m sure I’ll be back at some point – hopefully during climbing season so I can take on Mount Fuji!

One thought on “72 Hours in Tokyo”

Thankful for all the people, from Miami to Philadelphia to Tallahassee, who have helped me get back on my feet the past few months. Peace Corps didn’t work out, but when one door closes another one opens and I’m super excited to be starting a new job in Washington D.C! Check out my new blog post (link in bio) for the full update!
Doesn’t get more American than baseball, hot dogs and a $15 beer 🇺🇸⚾️
What a crazy few days. I found out Peace Corps was sending me home (temporarily) Friday morning, traveled 32 hours halfway across the world and arrived in Tennessee just 2.5 hours before @briannam28‘s wedding. I had been mentally preparing myself to miss this day for almost a year and I’m honestly still shocked by how the past few days have unfolded. But, despite the jet lag and exhaustion, I’m so thankful things worked out I got to be here celebrate with them!
Enjoying the sights, sounds and food of Kathmandu. New blog post about some of my favorite adventures in the city so far 🇳🇵(link in bio) #nepal #kathmandu #city #temple #travel #food
From England, to South Korea, to Tennessee, it’s been a year full of adventures, counting down until we see each other again and a whole lot of FaceTime calls. Long distance is challenging, but this guy somehow makes it the easiest thing I’ve ever done. @nicklucas92
This tap supplies water to about 15 households in my village. And for the fourth day in a row, there’s no water. Adapting to life in a rural village is hard in a lot of ways, but learning to cope with water scarcity and its far-reaching impacts has, by far, been the hardest. Check out my new blog post about how water scarcity impacts my day-to-day life in village (link in bio) #nepal #water #climatechange
%d bloggers like this: