Let me start off by saying I have never liked baseball.

Hate me if you want, but I find the sport generally boring and slow. I’ve been to a few baseball games in America, but I never really found it enjoyable. It was more of an obligatory American experience I felt like I had to have.

However, when some co-workers invited me out to a baseball game here in Korea, I jumped at the chance. Not because I was pumped to watch some guys run around a diamond, but because I was excited to experience baseball in the context of a culture so different from my own. While baseball is definitely popular in America, I had heard baseball is HUGE in Korea. So of course, I had to see for myself.

DMA baseball night! We made it on the big screen because a group of foreigners at a Korean baseball game is obviously a sight to see.

And let me tell you, baseball in Korea did not disappoint! For once in my life, I actually enjoyed watching the game and I loved experiencing something I always associated as “American” in a different culture. There were many similarities to the classic American experience, but it was the Korean baseball culture that really made this game so much fun.

There are so many reasons why I loved this experience, but here’s just a few of the reasons why Korean baseball has won me over.

Baseball in Korea is CHEAP

I went to one of the biggest games of the season, Incheon vs Seoul, so I was expecting to pay a bit more for a ticket. But despite the game being nearly sold out, tickets at the stand were only 10,000 won (approximately $8.94)! Of course, they weren’t amazing seats, but the stadium was rather small compared to American baseball stadiums, so you had a good view of the field no matter where you sat.

I was pleasantly surprised by how cheap the ticket was, but of course, like any sporting event, I expected to spend most of my money on food and drinks. I remember when I went to a Braves game in Atlanta a few summers ago, a damn hot dog was like $7 and a good beer, even more. I was hoping prices here in Korea would be a bit more reasonable, but I was shocked when I found out a beer was only 2,500 won. That’s $2.23! At a sporting event! And the food was cheap too. I paid under $4 for a kebab that was way better than any hotdog. 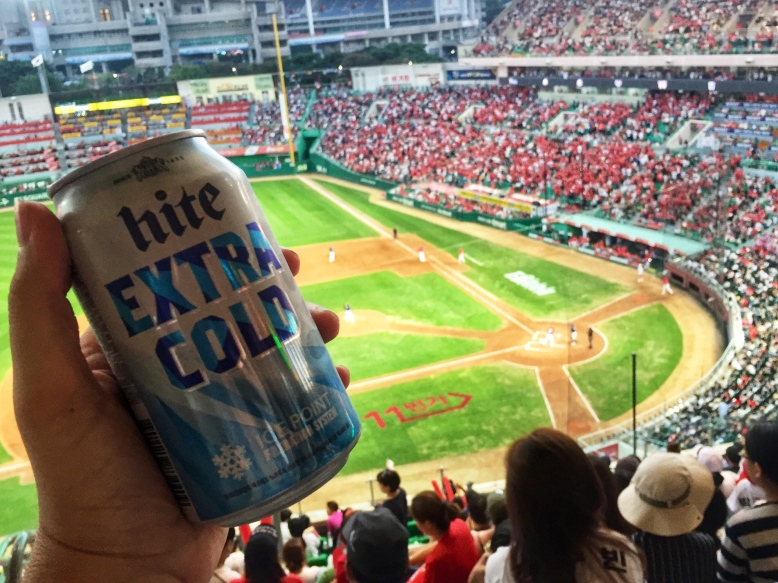 Speaking of food, you can get American classics at a Korean baseball game, such as hot dogs and fried chicken. However, most of the food options are obviously Korean. My personal favorite was the kebab with hot dog-like meat and rice cakes covered in a sweet glaze. Other food options included a bowl of tteokbokki (rice cakes in a spicy sauce), potatoes on a stick (they were so good!) and squid. Yes, squid.

Sausage and rice cake kebab in a sweet and sour sauce 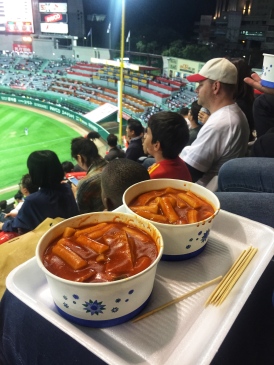 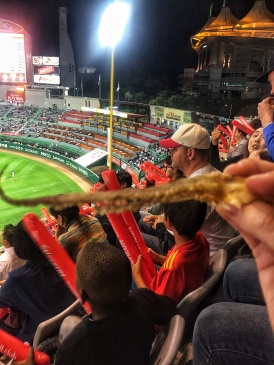 My co-worker causally walked up to the food stand, asked for a squid and then headed over to what I thought was a heater (it’s starting to get colder in Korea, so it made sense in my head). Turns out that “heater” was there for the sole purpose of grilling squid. I’m honestly still laughing over this classic moment of culture shock. But we grilled up our squid on the “heater” and returned to our seats where we feasted on all our Korean baseball food in typical Korean fashion, passing the food around and eating a little bit of everything.

The Fans are Awesome

I’m not saying American baseball fans are bad. I’m just saying they’ve got nothing on Korean baseball fans. I was amazed by how loud, enthusiastic and passionate the fans were, especially the home fans! Even when Incheon (the home team) was losing, the fans didn’t slow down at all. At several points I felt like I was at an American college football game – that’s how intense the cheering was.

Throughout the game, the occasional American baseball song was played and, like in the US, there were cheerleaders and dancers on the sidelines leading the crowd in cheers. But in Korea, every single player on the team has their own theme song. And every fan knows every single one of these songs, which I found incredibly impressive. Every time a player steps up to bat, the crowd starts singing their song and doing a choreographed dance that goes with it. My co-workers and I didn’t know any of the words, of course, and none of us can dance to save our lives, but we got a good laugh out of trying to follow along (and I’m sure all the Koreans got a good laugh at us too).

My favorite part of the game, though, was when all the home fans turned their phone flashlights on at the beginning of the 9th inning and waved them like you often see people doing at a concert. My Korean co-worker explained that this actually has a significant meaning for the home team. Incheon is a port city and is known as the gateway to Korea. When the international port opened in the 1880s, it led the economic development of the country. Flashing the lights on their phones is a way for the home fans to pay tribute to the lights that guided the ships, bringing them into Incheon Port and opening Korea up to the world.

The baseball festivities don’t end once the game is over. In Incheon, after a baseball game ends, everyone exits the stadium and heads to the streets for some classic Korean street food. There are massive tents set up with locals cooking away and fans drinking soju in plastic lawn chairs. My co-workers and I found some chairs and ordered panjun (a Korean pancake typically made with veggies and seafood – in this case octopus), beer and soju (the national alcoholic beverage of Korea). There’s also fireworks after a big game, similar to American baseball, but most people care more about socializing over soju than the fireworks, which I totally get to be honest. It was the perfect way to end a fun evening full of baseball, squid and culture shock and, thanks to Korea, I now have a newfound love for a sport I always hated. 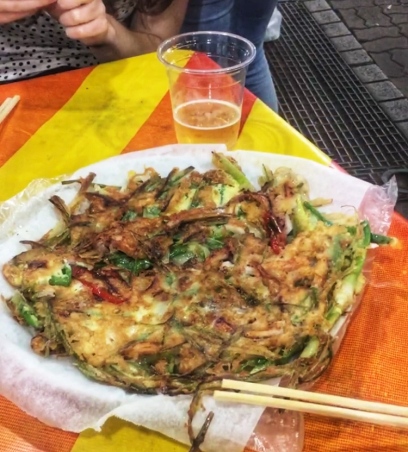 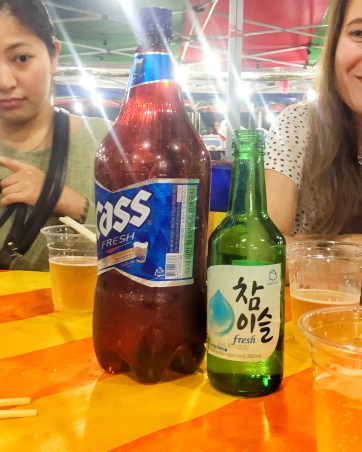 Beer and soju (you mix them together)

It took a pandemic for me to finally buy a chair so I can sit at my desk. But now I have a cozy place to work for the next few weeks/months (??) ... #stayhome #workfromhome #office #homeoffice #officedecor #workspace #officespace #apartmenttherapy #homedecor
Sunday mornings ☕️
Thankful for all the people, from Miami to Philadelphia to Tallahassee, who have helped me get back on my feet the past few months. Peace Corps didn’t work out, but when one door closes another one opens and I’m super excited to be starting a new job in Washington D.C! Check out my new blog post (link in bio) for the full update!
Doesn’t get more American than baseball, hot dogs and a $15 beer 🇺🇸⚾️
What a crazy few days. I found out Peace Corps was sending me home (temporarily) Friday morning, traveled 32 hours halfway across the world and arrived in Tennessee just 2.5 hours before @briannam28‘s wedding. I had been mentally preparing myself to miss this day for almost a year and I’m honestly still shocked by how the past few days have unfolded. But, despite the jet lag and exhaustion, I’m so thankful things worked out I got to be here celebrate with them!
Enjoying the sights, sounds and food of Kathmandu. New blog post about some of my favorite adventures in the city so far 🇳🇵(link in bio) #nepal #kathmandu #city #temple #travel #food
%d bloggers like this: